"The interbank market has collapsed"

"We're now seeing a domino effect as the credit multiplier goes into reverse and forces banks to cut back lending to clients," he said.

Mr Redeker said the latest alarming twist is a move by banks to deposit €28bn in funds at the European Central Bank in a panic flight to safety. This has jammed the mechanism used by the authorities to shore up the financial system in a crisis.

"The ECB is no longer able to inject liquidity because the money is just coming back to them again. This is extremely serious. If monetary policy is no longer working, there is a risk that the whole system will blow up in days," he said.

The euro plunged on Monday as the wave of bank failures hit the newswires, dropping 2pc to $1.43 against the dollar. It recovered slightly as the US Federal Reserve flooded the markets with $630bn of dollar funding with fellow central banks in the biggest liquidity blitz in history.

"We are at imminent risk of a credit crunch. Key markets are not functioning properly. The Europeans thought the sub-prime crisis was just American rubbish that the US should clean up itself, but now they are finding out that it is their rubbish too," he said. 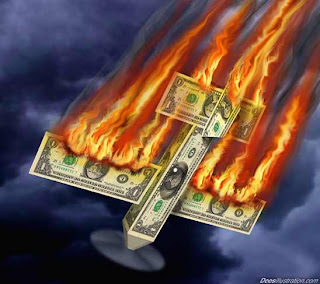